When I’m driving out and about on my own, I’ll try my best to avoid using a handicapped parking space if there is another (non-handicapped) one reasonably close by. I figure it’s only a little farther to walk and there may be someone else who might need it more, either for its proximity or for its extra entry/egress space. (Admittedly that someone else also could be one who “borrowed” his grandmother’s placard to “just run to the store” and park in an accessible space “just for a sec” and seemingly inconvenience no one since the spot was “just sitting there empty,” but let’s not go there.) 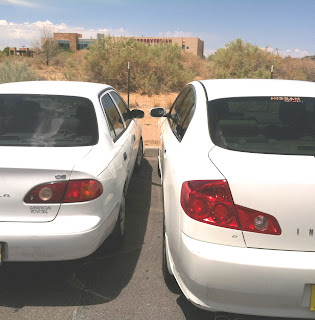 Since I use forearm crutches or a cane for my multiple sclerosis, a little extra room to get in and out of the car is handy but certainly not required—nowhere near the space needed if I was using a wheelchair or walker. So when I went to the gym the other day, I did my civic duty and parked in a space used by the normals. I just forgot to count on one thing: that humankind cannot always be counted on, which I discovered the moment I walked out of the gym after my workout, getting ready to drive home.


Unbelievably, someone had parked their car thisclose to my car. It was amusingly close, almost as if it had to have been planned. Twiggy wouldn’t have fit into my driver’s side door much less a midday shadow. Naturally I looked around for the source of this most incredible parking job. Was I on an episode of Punked? “Ashton, come on out!” Nope. Perhaps someone was videotaping to make this into a YouTube meme complete with an autotuned song of me saying “You have GOT to be kidding me!” (“Kidding me” repeating in the background, with a fade, I can hear it now). But there was not one kid with a camera within shouting distance. Ah, bugger.
Deflated at my Internet fame that was not to be, I recruited a kind staffer to put out an announcement on the gym loudspeaker. Alas, it didn’t start the way I would have started it (“Would the a-hole with license plate…”) but it was apparently effective. Shortly thereafter an older woman sheepishly ran out and moved her car, half apologizing and half being clearly annoyed that I didn’t have the dexterity to climb into the passenger side and hop over the center console. Sigh, the nerve of me.
Posted by Dave Bexfield at 10:49 AM 2 comments:

“At least you don’t have cancer” 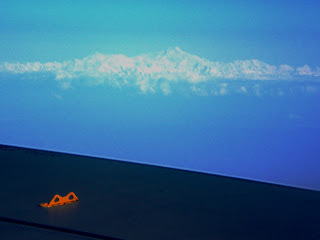 People say lots of silly things when they hear you have multiple sclerosis. “It could be worse… you could have Lou Gehrig’s disease.” Um, okay, I suppose MS usually doesn’t quite rank up there with ALS in terms of nasty neurological diseases. Wow, I feel so lucky. Maybe today I should play the lottery, too. “I know someone who has MS and she just climbed the Seven Summits.” Her name is Lori Schneider (correction: I previously mentioned Wendy Booker, another climber who climbed but didn't summit Everest), she’s not your normal MSer, and I’m pretty sure I’m not seeing the summit of Everest unless it’s in an IMAX theater. (Okay, technically I did see the summit… from an airplane flying from Bangladesh to Bhutan a few years ago, but seriously.) “I have a couple friends with MS, Stacey and Madison. And Madison is doing great!” I know this may come as a shock, but even with MS I still have the powers of deductive reasoning. What the hell happened to Stacey? Wait, don’t tell me. “My aunt had MS… she died.” Oh, my favorite. I know someone who had MS. Thanks for sharing.

People mean well, they do (and I’m sure most are clueless as to what to say), but there has always been one comment that, at least until recently, had grated on me more than most. “At least you don’t have cancer.” When I was diagnosed I would have disagreed with that statement, indeed argued. Unlike with MS, with cancer you have a chance to beat it. I have a few friends my age who have beaten it, even from the depths of Stage IV, and are living pretty darn normal lives. But I also know those who have lost that fight far too young. It’s devastating. Permanent. Those individuals almost certainly would have chosen our fate. Trust me, you don’t want cancer. At least with multiple sclerosis, there is ongoing cutting-edge research that could change the face of this disease. And unlike cancer sufferers, time is on our side. One day we’ll beat this. Yeah, I said it. We’ll beat this. Until then, when I tell people I have MS, I personally prefer hearing the simple “That sucks, sorry.” Yes, it does. For now, that is.