Don’t Set the Puppy on Fire

We’ve all been there—getting off the couch to wander into the kitchen to grab that thing. Or do that thing. Or find that thing. Or put away that thing. Wait, now why the hell did I go into the kitchen again? Don’t worry, that’s probably not your MS talking, that’s just life. Now when you get back to the couch and suddenly remember why you went into the kitchen in the first place, then go back to the kitchen focused on completing your once wayward mission… and you forget again. That might be your multiple sclerosis.
Cognitive issues with MS are maddening. I know you’re smart. You know you’re smart. But this disease doesn’t care if you won the science fair in 6th grade or aced your SATs or have a PhD in economics along with an MBA from Wharton. As many as two thirds of people with MS have some level of cognitive impairment and it often goes beyond forgetting a word or the title of a movie you saw last month. Attention spans can wane, concentrating can be challenging—even tiring. And multitasking may be virtually impossible, especially with even minor distractions. Worse, these issues tend to creep up in MS like receding hairlines, high school reunions, and sequels to Pirates of the Caribbean. It’s not your fault. It’s Johnny Depp’s fault and, well, it’s the progressive nature of this disease.
When your brain gets fuzzy, you can laugh. Or cry. Or heck, do both. You put the cereal in the fridge? Laugh. Milk in the pantry? Cry (it was a whole gallon!). Beer in the freezer? Laugh… then cry after it explodes. But better still, be more deliberate, write yourself reminders, set timers with Post-Its, and don’t beat yourself up when you do something silly. As a story I recently received from a fellow active MSer succinctly illustrates, sometimes you just have to go with the flow…. 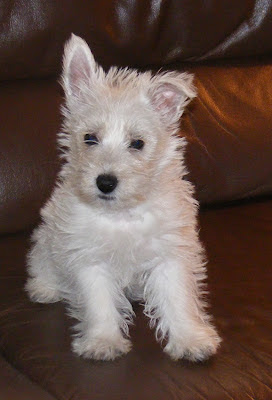 “Tonight I had such an adventure cooking a very simple meal of spaghetti—Ragu sauce and ground beef with pre-mixed spaghetti seasoning. First I set a paper towel on fire. Then I melted a spoon. Then I forgot to heat up the sauce (thought something was missing but didn't know what), so I tried to heat it fast on high without a lid and it splattered all over. Then I dropped part my meal (a small part) on the floor making a big spaghetti sauce stain on the carpet. But the paper towel part had to be the best part. Instead of trying to smother the flames with a pot or something (I couldn't think what I should do) I carried it over to the sink making the flames bigger. Fortunately I didn't burn my fingers (close), or set the puppy [at left] or the house on fire or anything else on fire.”
To counter cognitive issues, it helps to realize that overdoing it (walking the dog before dinner) or getting overheated (cooking in a warm kitchen) or being over stimulated (doing several tasks quickly) can amp up your cog fog. The more you understand your triggers, the better you can cope with brain farts. And if you still have a mental poofer, do what I do: blame it on the dog! Just don’t set the puppy aflame or you’ll totally blow your alibi.
Posted by Dave Bexfield at 7:57 AM

LoL that was well worth the read! Nice to come across someone with a since of humor out of it all! It truly is a MSerS life! LOL

Outstanding! Where? Hell I don't know but I'm standing...in a field...my field, I think...maybe. What was that timer set for? Nothing cooking, no matches lit, wait, there's tea steeping, no there's not, I'll have to call you back.
You mean one of those kinds of days? Especially standing all alone in the kitchen? Naw, no cognitive dysfunction there...

So funny and fitting. I feel so much better about the soup which exploded all over my kitchen last week. I laughed on that day - because I was too tired to cry - and realized that life does somehow go on. Go with the flow really is the name of the game.

Eeee Gads! Hillarious! TOTALLY JUST MADE MY DAY! Seriously. And what was that? learn triggers? Who would have thought of that lol certainly not me when I can't figure out how to pick something up because my hands are full of things I don't even know why I'm holding, hahahaha. So glad I am not the only one. and I love how someone's story and even from 7 years ago can be so in the now to bring joy, comradery, and support to one who is new to these things and has been feeling like her world is falling apart at times. It is all about the Joy baby. I almost forgot that! Laugh, cry, but laugh more and it's all ok. It is what is and what I CAN DO is MY BEST! Again, thank YOU!! I cherish this! I needed that laugh!

SoulFuel! Thanks for the comment and sorry for the post delay (I have to review posts on older blogs to screen from spammers). Glad to have made your day. Your words made mine!