Freedom on a Trike

The moment I start cranking, feelings of liberation, glee, freedom overpowered my multiple sclerosis. MS, what MS? And then in the next moment, feelings of terror and dread took over. For the first time I was “pedaling” a hand-powered adult trike. The breeze of speed weaved its way through the vents of my bike helmet, its strap still crusty with five-year-old sweat from my last ride on a two-wheeled bicycle. All was right with the world. Until, that is, I reached cruising speed, when I realized that I had overlooked one minor item. How to stop this particular hand-powered adult trike.

“Um, where the hell are the brakes?!” I called back to Jackie, a physical therapist at the US Veteran’s Administration. The VA was hosting a day of adaptive cycling for disabled veterans and others with disabilities and I was giddy to get the opportunity. Before riding I had noticed that a few of the other cycles had hand brakes connected to the hand crank, but this trike was, by all appearances, brake free. A hand-guided, hand-powered missile traveling at, well, subsonic speeds of 7-9 mph.


“Just turn the hand crank backward,” she hollered. “And be careful not to accidentally do that when you coast or you’ll stop.”


For the afternoon I got to test four trikes in total, two hand-powered and two foot-powered. Each had their plusses and minuses, and can best be described in terms of far faster, far larger, gasoline-powered motor vehicles. 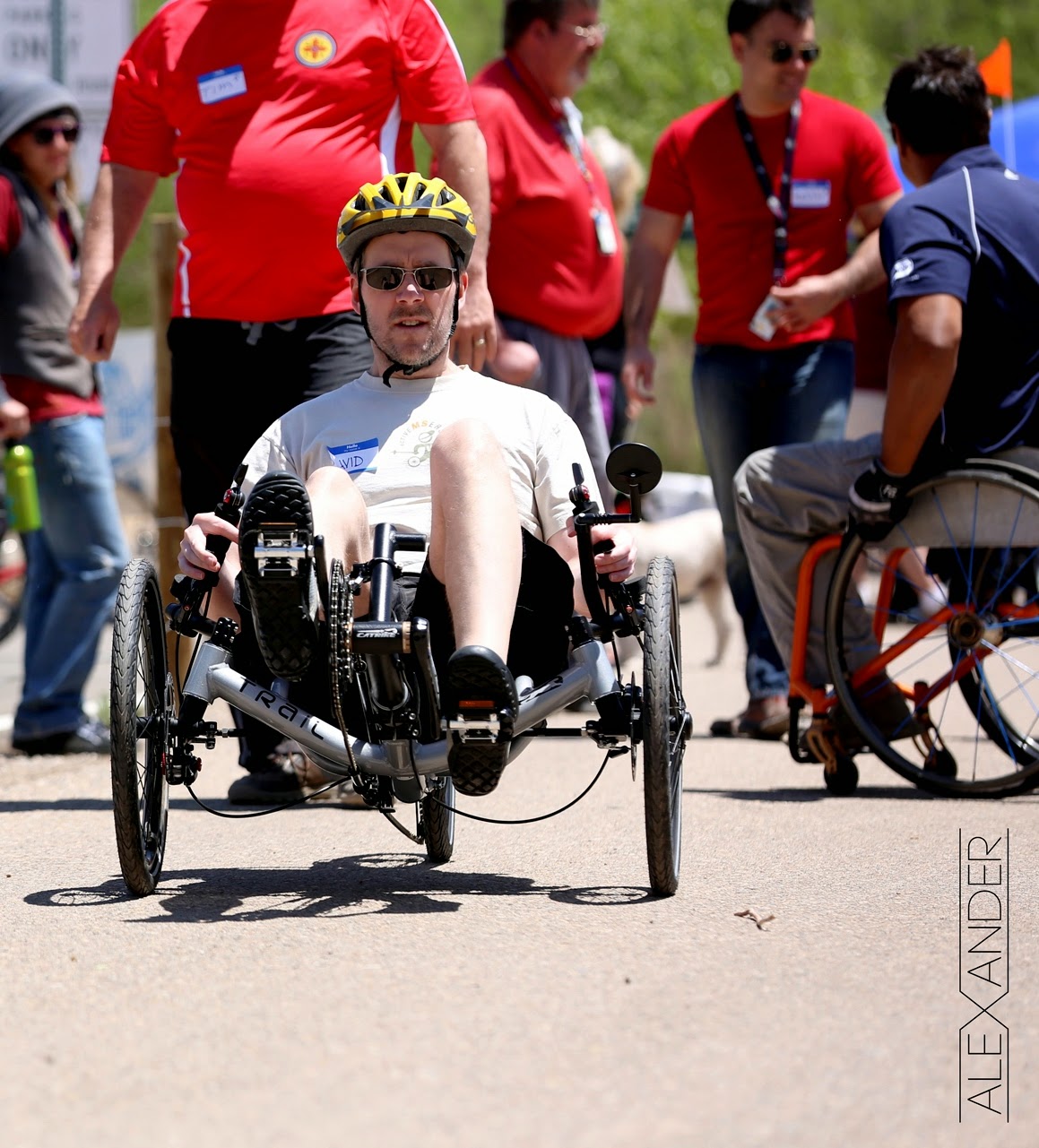 The Convertible Sports Car. All of the foot-powered trikes out for demonstration were set up with two wheels in front and one in the rear (a “tadpole” design). My first ride of the day was on a silver Catrike Villager, and it felt like driving an open-air sports car. With my wonky legs, it wasn’t a drag racer (alas, no leg-powered bike of mine would ever burn rubber at the strip), but it was quick and snappy and hella fun. Turns were immediate and stable while the seating was comfortable—low, but not too low. Operating the trike, with the steering by your hips, felt natural. I breezed the mile down the trail on my fresh legs to the designated turnaround point and wanted to blow by the volunteers to keep exploring. But since the event was billed as a day to experiment with different trikes, not to abscond with them, I pulled a U and headed back.


The School Bus. The first hand trike I tried, a generic version, was an upright model with a tall bench seat that was decidedly old school, which is probably why it felt like driving a school bus. Not that I’ve ever driven a school bus, but I’ve got a pretty good idea that one lumbers along like this trike. With two wheels in back and one wheel in front (a “delta” design), you crank and steer at the same time. Going in reverse slowed or stopped the cycle, triggering a large stop sign to swing out and red lights to start flashing. Or at least so it seemed—the trike felt heavy. Hills were challenging, requiring a good bit of effort to climb even in the easiest gears … and even more attention to descend. Being so upright was not very stable and braking while turning didn’t feel natural at all. 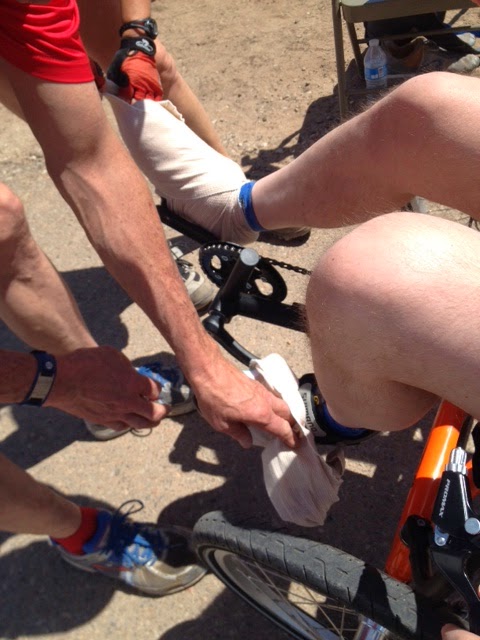 The SUV. The Terra Trike Rambler wanted to be a sporty SUV (think BMW or Infiniti), versatile with a bit of panache. Alas, it felt a bit more pedestrian on this test ride. The higher seating position, a trademark of Terra Trikes, should have made entry and egress rather easy, but that would be wrong. The distance from the axle (which you have to stand in front of to mount the bike) to the seat is considerable, so you fall into the seat rather than lower into the seat. The higher seating position also meant sacrifices in handling. It just felt a bit clumsy and not quite up to the Catrike (fair enough, the Catrike is at least a third pricier). Because clip-less pedals were not available that day for the Rambler, folks had to use ace bandages (“the duct tape of physical therapists!”) to wrap my feet to the pedals. And being attached to the pedals is rather important. If a foot slides off, it could slide under the trike. If your foot slides under the trike, odds are rather high it’s going to hurt. A lot. Consider clip-less pedals mandatory for all foot-powered trikes. 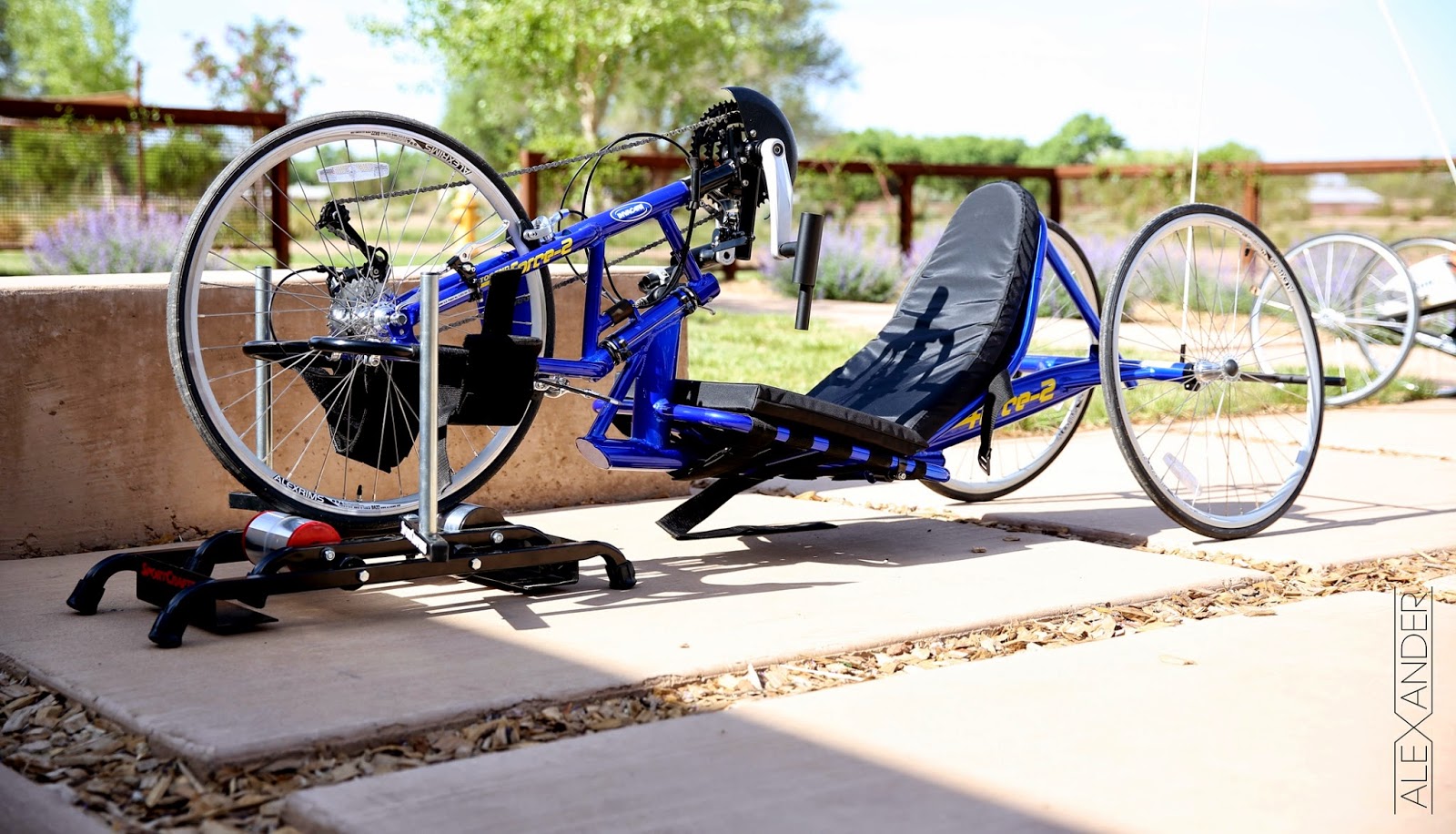 The Muscle Car. I far preferred this lower slung hand trike, the Top End Force 2 from Invacare, to my school bus. Although it had a larger turning radius and it was more challenging to wriggle out of the seat, the speed of the trike was addicting. These brakes were on the crank, so they spun with your arms, making them more intuitive to use. But with this V8, I rarely braked, flooring it instead. The trike didn’t feel especially spry or nimble, but it was fast and liked the open throttle. To get up to speed, I spooled through the many gears—which, it should be noted, is a bit awkward, since shifting is done on the center shaft, meaning that you have to remove one hand from the crank (which is also where you steer). Once I reached cruising altitude (a muscle car that flies!), Jackie informed me that it was time to stow my tray table and return my seat to its upright position. Doh! I didn’t want the afternoon to end.


The entire experience was fabulous. Jackie and others at the VA (thanks Michelle!) ensured the event went smoothly, and the volunteers were more than up to the task. I’ve got to give a shout out in particular to Charlie, owner of Albuquerque’s Two Wheel Drive (http://twowheeldrive.com/). To my knowledge, his shop sells more trikes in New Mexico than any other cycling store, and Charlie knows his stuff. Note, most of the photos you see here are courtesy of Alexander Tran, another volunteer. (www.alexanderphotographyNM.com).
Posted by Dave Bexfield at 2:14 PM 20 comments: