I got a question the other day about where would be the best place to relocate to if you have multiple sclerosis. So I put on my thinkin’ cap—and contrary to what my sisters say, it is not tall and pointy—and started narrowing down options. First, obviously, you’ll want to nix anywhere that’s both hot and humid, the MS double sledgehammer (or in WWE parlance, the flying forearm smash combined with the spinning headlock elbow drop), so let’s avoid that. Actually, let’s also include on the no-go list areas that just get plain hot. I mean, hot is still hot. (Sorry Qatar.) So how about the mountains? Um, too snowy and icy. Seriously, if you have any walking issues, snow on the ground will make going anywhere outside a bit like prepping to tackle K2. And let’s not even talk about all the hot tub parties you’d likely have to take a pass on, as hot tubs are the testicular claw of illegal wrestling moves for many of us. Now I guess that means we’ll have to lop off any place in the world where it snows. Ah then, what about an area that is cool but not snowy, like the Pacific Northwest or Scotland? No, no, that won’t work. I probably don’t have to remind you that MSers need more Vitamin D. Plus depression is a big problem with MS and days of rain can enhance those bummed out feelings. Think getting pinned by a split-legged corkscrew moonsault. Yeah, I know, ugh. I hate when I get moonsaulted. Hmm.


Aha! Maybe a sunny area along the coast that is dry. It can’t get too hot by the ocean, can it? Like 113 degrees in Los Angeles last year or 115 degrees in Melbourne, Australia, the year before. Oy vey. And besides, you need to have a fat wallet to get a pad in those locations, something most of us don’t have. Oh, oh, I think I’ve got it. A deserted island with the ideal temperature year round and cool ocean breezes and the perfect amount of sun! Yes! Wait, no. You’d have no access to medical care or Cheetos, two non-starters in my book. So does that mean there is not an MS utopia we should all move to? Honestly, you are probably already there.
The best area to live—by far—is where you have the strongest social network of family and friends. Having folks you can count on to lend a hand when you hit a rough patch—physically or mentally—will help you get up faster from the mat, even after an El Kabong. (Note: according to Wikipedia, El Kabong, although it sounds a lot like a nasty relapse, “simply involves breaking a guitar over an opponent’s head. The name is a reference to Quick Draw McGraw who would say this phrase prior to hitting someone with a guitar.” Come to think of it, that sounds exactly like a relapse, so it turns out I’ve been El Kabonged more than a few times!)

“Let’s go the top.” I was feeling confident. “The top top.” After all, I had snowboarded on my own two feet just last weekend. No sit-ski. No tethering with worried instructors trying to keep me from hitting a tree. Just me and my snowboard and a pair of outriggers. And I totally ripped up the slopes. Well, technically “slope” (singular), and more specifically, the bottom third of the bunny hill, which is noted for having a pitch imperceptible to the naked eye. But still. I mean, the last time I had snowboarded was in the spring of 2009 on champagne snow, carving effortless turns on black diamond steeps. I was sure after last weekend that it was all coming back to me. I just needed a little vertical. 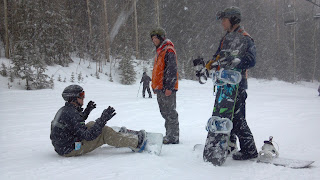 “Dave, do you mean the top of the bunny slope?” My adaptive snowboard instructor, Nick, wasn’t so confident. His skeptical radar went off and an eyebrow raised. So I pleaded. He listened patiently. I pleaded some more. And then a wee bit more. He finally relented. In minutes I was riding the lift again with my wife, the only thing keeping me from smothering her with excited kisses was a terrified Nick sitting between us. Still, all was right in the world. And then we reached the top.
I could remember the meandering blue diamond run with my eyes closed. Start left, drop down, hit the cat with some speed, scream under the lift popping turns left and right. There was just one problem—I opened my eyes. And before me was a run so steep that I might as well have just been dropped off onto the summit of an Alaskan mountain with a Warren Miller film crew about to document my epic descent. Four years can do a hell of a lot to your memory. 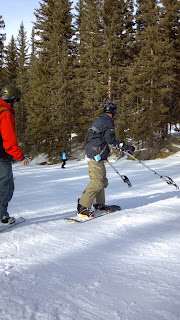 The run started as I feared. Plunk. And the plunks kept on coming. Start, plunk. Turn, plunk. Hey, check out that other skier, plunk. Don’t film me honey, plunk. My lesson was scheduled to be two hours long. At this rate, we’d be lucky to be down before sunset. Nick informed me it was time for Plan B. Brilliant! I would feign injury (flash migraine, unrelenting Charlie horse, I could come up with a bunch) and I’d get ferried down in the bucket by ski patrol in time for dinner.


“Um, no,” said Nick. “I am going to hold onto you and we are going to dance together on our snowboards all the way down.”
Jesus. But Nick wasn’t going to let me down, nor let me continue to punish myself on slopes I clearly wasn’t yet ready for. When we got down to the bunny hill, with minutes to spare in my lesson, he let me go off again on my own, and I pulled a few turns before one more gnarly fall. As I stared into the sky, cataloguing my limbs (still there), I thought about the incredible day I just had. I was snowboarding, dammit!


Now one could chalk this little victory up to my dogged determination or overwhelming willpower (or, let’s be honest, to Nick). But you’d be giving me far too much credit. Honestly, I believe we all have the power to conjure those resources when we really want to (well, except for the power of summoning Nick … and I imagine he’s now screening his calls). Heck, I found an MS snowboarding video on YouTube that features a woman who also had been off her board for four years—and she was killing it with far more panache than I.
There will always be mountains with multiple sclerosis. And, fortunately, molehills. You might not conquer them all, but you’ll never ever reach a summit if you never ever try.