Life (and Death?) Decisions in the Himalayas 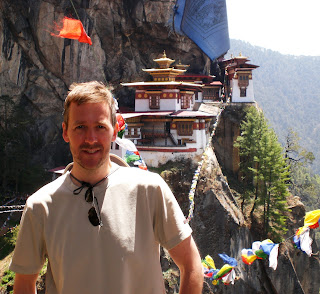 I work very hard at making sure multiple sclerosis doesn't rule my life. But sometimes it does make the rules—rules I don’t agree with, but begrudgingly follow. Case in point: my adventure in 2008 to the Kingdom of Bhutan, an unspoiled country in the Himalayas, rich with culture, scenery, and dramatic monasteries. One of the country’s holiest sites is Taktshang Goemba (Tiger’s Nest Monastery). Perched 3,000 feet above the valley floor of Paro, Taktshang hangs on a cliff face, accessible only by a twisty mess of hundreds of stairs. 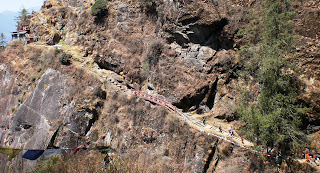 Rocky, uneven stairs without railings, and precipitous drops guaranteed to take your life with a misstep. At the time I was a mountain goat with trekking poles, but stairs without railings were admittedly a nemesis, requiring much more concentration and careful foot placement. Was it worth risking plunging to my demise to visit Tiger’s Nest? Odds were good I’d make it without incident, but I recall odds were also good I wouldn't end up with a crappy disease. 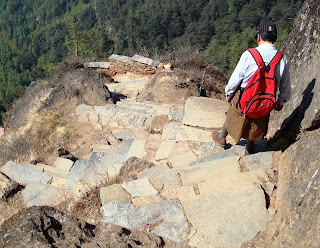 I made the difficult decision to pass, and watched with binoculars as my wife and good friend Andy visited the holy monastery. Dozens of people passed me from my safe perch. When a man from Holland turned back due to fear of heights, I was patting myself on the back for making such a wise decision…. But then an 85-year-old great grandmother went by me, barely able to walk, on her quest to Taktshang. Hmm, I thought. And then not five minutes later, a blind dude, grabbing onto his friend’s backpack and using his white cane to identify each step, happily hiked past.
Okay, that one stung a bit. But he was Bhutanese (probably a confident climber) and he wouldn't get vertigo looking down a cliff face (one of the rare benefits of being blind). It’s absolutely inspiring to see others make the best of their disabilities. Sure, having MS means saying no to some challenges that earlier you could have taken on with gusto. And that’s okay. I’d rather decline a challenge than to be faced with no challenges at all.
Originally posted April 30, 2008 (updated for clarity)
Email Post
Labels: Adventures Balance Challenges Staying Active Travel Trekking Poles Vision