So there I was, on my back, slinking feet first through a hole just 10 inches high. I call ahead to the guide. “There isn’t some crazy abyss on the other side, is there?” After all, I could only see rock inches away from my face, as I had to tilt my helmeted head to the side to make the tight squeeze. His response was not comforting.
“Actually there is, so you’ll want to place your feet exactly where I tell you, then mantle across to the rock saddle that bisects the drop-off, and carefully scootch across on your rear.” 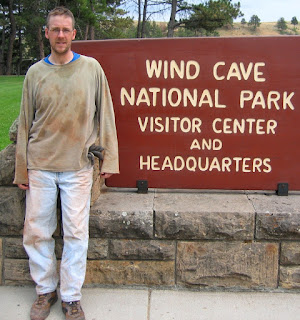 Perfect. 100 feet underground in South Dakota’s Wind Cave on the park’s ”wild cave tour” in the summer of 2007 with eight other gullible souls, none of whom had multiple sclerosis like me. Despite the 53 degree temps, the four-hour tour had fired up my vision issues and my right leg was getting sketchy. AND I HAD TO SLINK ACROSS A NARROW SLIVER OF ROCK OVER AN ABYSS? I could already see the headline. “Founder of MS Nonprofit Dies in Cave Accident; Guy had it Coming.”
I debated my options. Try. Or die trying. While most of the cave was relatively easy to navigate, with lots of handholds and crawling, this was the final of three challenging sections. So I turned off my brain, tried not to stress, and focused on the task at hand: not dying. As you can tell since you are reading this, I was successful. The rest of tour was cake, except that the fright of the abyss and frequent stooping knocked my legs out. I could crawl, but walking was a major chore for the last hour and I eagerly looked forward to every little break.
Would I recommend it to other MSers? You better be in great shape. And not have a fear of heights. And enjoy getting into literally tight situations!
Originally published August 17, 2007. Edited for clarity.
Email Post
Labels: Adventures Balance Caving Staying Active Weakness

Anonymous said…
I love it! Gave me an adrenaline rush just reading about that little adventure .

Lisa Emrich said…
Hi Dave,
I didn't realize that you had moved your blog, or opened this one. I will add you to the directory at MS Bloggers.
October 21, 2011 at 9:45 AM

Dave Bexfield said…
Lisa, one of my favorite MS bloggers! My original MS blog link was a random jumble of letters and numbers and folks couldn't leave comments. People also were concerned about clicking such a strange link, so I moved it here to Blogger. The old one is still there, but I am no longer posting on it and I'm gradually transferring the posts. Thanks so much for adding me to the directory!
October 21, 2011 at 2:00 PM

Stelios said…
Hi Dave, I have MS and go caving regularly. So far the walk to the cave is more hassle than the cave trip itself. Our caves are usually below 60 degrees Fahrenheit, so it's great to be able to get away from the heat in the summer.
May 4, 2015 at 7:51 AM