Suicide, multiple sclerosis, and the loss of a best friend

Let’s start with some facts on this serious topic. Just having multiple sclerosis increases your risk of suicide, according to one study, a sobering seven fold. Even among those with other neurologic disorders—including ALS, which is often fatal—the risk for MSers is still double. Male, under 30, and recently diagnosed (within five years) amplify your risk. But why?
Researchers aren’t entirely sure. People with MS are predisposed to get depression and it is a hallmark of MS, as half of us with the disease will struggle with depression at some point during our lives… yet it often goes unreported and untreated. And the consequences of depression can be devastating.
Five years ago I lost one of my closest friends to suicide. Ironically, Brandon was a major lifeline when I was trying to cope with getting diagnosed. Giving his eulogy was one of the hardest things I’ve ever done. I’d like to share what I wrote. 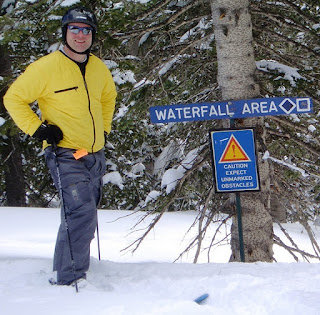 Brandon Lynn Crotty passed away June 27, 2006. He was 36. Born December 27, 1969 in , , grew up there and graduated from before starting his career in pharmaceuticals sales. He moved to in 2000, most recently becoming one of his company’s top sales representatives worldwide. An aficionado of classical music and jazz, was equally as fond of a good, bump-drafting NASCAR race. An avid cyclist, skier, and artist, he was most at peace in his studio, paintbrush in hand, the symphonies of Mahler softly echoing off the walls. His uniquely sharp wit, intelligent repartee, and unabashed enthusiasm for living life to its fullest will be forever missed. Brandon is survived by his parents Ronald and Carlyne Crotty of Placitas, NM; grandmother Leona Crotty of Garden City, KS; and wife Amy of Albuquerque.
------------------------
Before I begin my personal remarks, I have a request of all of you. Whenever you think about Brandon Crotty, please avoid two words. “What if.”
I will say with absolute conviction that Brandon’s passing was not written in his life’s script. His demons, on that particular night at that particular time, were too strong, too overwhelming. I personally believe that no amount of what ifs would have stopped those demons. And now, no amount of what ifs will bring back. No amount of what ifs will lessen the pain. So I implore all of you to purge those thoughts. Replace every “what if” with an “I remember”.
I remember when I first met Brandon. He really didn’t pay much attention to me at first. He gravitated, instead, to my stereo speakers. He was an audiophile, after all. But by the end of the night, I knew, I just knew, that we were going to be the closest of friends.
I remember how he introduced me to jazz. Like he has done with many a friend before me, he gave me a CD—Kind of Blue by Miles Davis. He told me how excited he was for me. How he wished he could once again experience the simple joy of discovering the magic of John Coltrane, Sarah Vaughan, and Thelonious Monk for the first time. Later, he went through his entire jazz collection and wrote down a list of his favorite albums. Albums that he thought should be the anchor of my collection. That handwritten list, safely folded in my wallet, goes with me everywhere. And it always will.
I remember how he introduced me to some of the other finer things in life. NASCAR … The Sopranos … obnoxiously loud ski outfits.
I remember when I went down my first double black diamond ski run at Wolf Creek. was right next to me. For better or for worse, we were going down together.
I remember how we talked about his art. How determined he was that his next career would be that of a painter.
I remember when he told me, excitedly, that his parents were moving to town. How great it was to have his mom and dad so close by.
And I remember how it was Brandon who reached out and helped me when I was recently diagnosed with multiple sclerosis. He was the first friend to pull me out of the house for something other than a doctor’s appointment. He listened. He cared. And he told me everything was going to be okay.
I remember it all. And I’ll never forget.
When we spoke last—a week ago today—I thanked Brandon for his help with my MS and let him know just how much that meant to me. He proudly told me he would ride his bicycle with my name on his jersey for an MS fundraiser this August. He was excited about his latest works of art, all in various stages of progress, impatiently drying. He was eager, genuinely eager, to tackle new challenges and continue living life to its fullest.
No, this final chapter was not supposed to be your destiny, Brandon.

You’ve changed my life … you’ve made me a better man. And in your own way, you’ve changed the lives of everyone you’ve crossed paths with. We all thank you, Brandon. You’ll be missed by your family, your friends, and your colleagues more than even your brilliant mind would ever be able to comprehend.
Today we say so long, Brandon. But we'll always remember.
Those thoughts of ending your own life can unpredictably invade your brain on even your best days—it happens to many of us with this disease. But if those thoughts are not fleeting, I ask that you please, please get help. Call your local suicide prevention hotline. In the US, call the National Suicide Prevention Lifeline: 1-800-273-8255.
Email Post
Labels: Coping Depression Suicide

Carla said…
Thank you for sharing this with us. I pray I don't slip down that deep hole of serious depression. I have to be thankful for each day I can go to sleep with a smile on my face.
October 27, 2011 at 1:45 AM

Dave Bexfield said…
Carla—if depression does sneak in, remember it's not you, it's this darn disease. Those brain lesions can hit our "depression lobes" with surprising accuracy even with the most positive of attitudes. That said, I'm always smiling!
October 28, 2011 at 11:32 AM

Kevan B. said…
I Wish that I had known that the deamon had a name. I struggle with this on a daily basis, and yes sometimes it does become to much to handle. In the past 17 years I have lost to the deamon 6 times, 4 of those took an extensive time in a hospital to recover. I am thankfull that there are people out there that could bring me back. I can't say that I wont have to face that deamon again but I now know that there are alot of pepole to help me face it together. I know one day I will beat the deamon!
June 26, 2012 at 4:19 PM

Unknown said…
Just stopping by to read this, look at the picture and just spend a moment with Brandon. Thanks for posting this here. It's nice to come back to.
February 12, 2014 at 8:01 PM

I have slipped down that dark hole more times than I care to admit. It takes all that I have to crawl out. There are many days that I think it would be better to just slip away. But, I hang on. It is becoming more difficult to hang on. Few understand the daily struggles. How do you live, work a job, maintain relationships and battle the disease? Yes, I often think it would be easier to let go. But, I think of loved ones. Who will take care of my dog? Yes, I hang on another day. Trying to find my way back from this cold, and sad place. I constantly feel misunderstood.

People say call someone when you feel suicidal. But really, what do you say? How do you say that "I feel like I am the only one in the world right now." How do you tell someone that the emotional pain is too great? In that weak moment, you tell someone how you feel and then they lock you up in some hospital. What happens when you get out? At the end of the day, I must find a reason to remain on this earth. I must find a way to navigate this depressive state.

Ok, ok, I am calling the hotline now. Sorry for rambling. I wish you all goog health.

Dave Bexfield said…
Portia, you've got a lot of friends here. You are so not alone--feel free to ramble away. Everyone's life's compass goes on the fritz every now and then. Hang in there and I hope you called.
March 20, 2014 at 7:35 AM

Anonymous said…
Thanks! I find myself seeking out people that suffer from MS more often. I get soooooo... Tired of explaining things. Here lately, I just look at the person when they are giving me the business about being in bed instead of visiting or socializing. I 'very explained a thousand times. It is difficult to trust people because I get tired of getting smacked in the head because I am too tired, sick or forgot something. There is no need for me to lie. I do the post-it's, emails to self, a list of things to do. If I can't complete something the minute that I am reminded of it. According to some people, I am a big liar. I am told, "How could you forget that fast?" Easier to just do my own thing and only communicate with those that understand. A wonderful friend told me to stop and breathe before I break. I am really trying.
March 20, 2014 at 2:26 PM

Thanks! Having a sinus infection does not help. It is difficult to manage when I am sick. The house comes crashing down.

Very frustrated and sad today. I've been fighting this sinus infection. The antibiotic does not appear to be working. The infection is making the MS flare. Can hardly feel my right foot. I am scheduled to attend a conference tomorrow and another one next week. Not sure that I will make it.

Hey, people say to talk about stuff. I have tried that lately. It does no good. I often wonder what happens after you admit that suicide is a serious consideration. How do you stop being tired all of the time? How do you get over being sad and depressed because you do not have enough energy to accomplish all that is necessary? How do you get over not thinking clear enough through the day to be as productive as necessary? It drives me nuts. Tired, head hurts, pain in my face. Can hardly feel my left foot! What to do? What to do? Vision is bad. Yet, there is so,much to do. I really wanted to attend a conference tomorrow but I feel like crap right now! I also feel like a big baby saying all of this stuff. Called a friend the other day. Got voice mail. Later, I was glad that she did not answer because I would have cried. Probably would have said no more than two words,

Nothing is working for me. I don't even feel like trying anymore. Feel like I have nothing left. I tweet nothing but positive stuff. Tell people to,hang on but I can't seem to hang on!

Dave Bexfield said…
Portia, I'd be lying if I said I've never been there. Having MS can at times feel impossible, insurmountable. Even if you do everything right. Go to the conference. Do not let this disease win; I can tell from your words you can be ox strong when you have to be. Be the ox. (Don't necessarily eat like an ox, however, they eat a hella lot.)
March 21, 2014 at 9:58 PM

Unknown said…
Dave-
You have always been a gifted writer and speaker and have always nailed every Communication class presentation (without benefit of preparation - damn you).

You wrote a beautiful eulogy for your friend and I am sure your presented in to perfection.