I’ve never liked that guy, Murphy, always showin’ up at the most inopportune of times in multiple sclerosis. Like last week, when I ventured out to grocery shop for a 10-person dinner party (one that catered to a) vegetarians and b) people allergic to onions, but that’s for another story). All seemed pretty darn smooth when I arrived at the store. I even got the chance to park next to an empty handicapped spot, which I always try to do if one is available—someone may need that extra access far more than I do. And then that dude showed up. Murphy. There was just one available scooter… and the battery was just about dead. 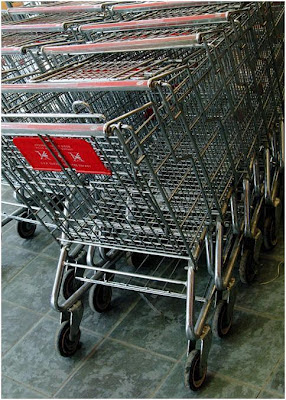 When I grocery shop these days I usually use one of the store’s Hoverounds. It saves the MS legs for needed work later in the afternoon and it prevents me from having to ask the staff to hunt down a chair for me if I bonk an hour into my shop. And that conversation always goes like this: “Chair? Why? I don’t think we have one.” I nod. “That’s okay, I’ll sit on the lettuce. It’s softer than the apples or potatoes.” A chair usually shows up rather quickly.
Of all days I really needed to save the legs, today was that day. I couldn’t wait and come back later—the rest of the afternoon was slated for mandatory cooking and dinner prep for the weekend. Worse, I had a big haul to get and Laura had just run out of allergy medicine at the peak of allergy season. So I came up with a plan. Using the near-dead scooter, I’d hit the pharmacist (located at the opposite end of the store from the fresh fruit and veggies) and then switch to a push cart and hustle. No prob, right? Wrong.
“Your prescription isn’t ready.” Fudge. The scooter was wheezing and I was at the wrong end of the store. So I plugged the scooter in at the pharmacy and waited. “The doctor hasn’t called us back, so we’ll page you when it’s ready.” Holy bat guano, Batman. So off I go back to the front of the store to drop off the electric slug only to get paged midway. Mother Mary Joseph Stalin. Turning around, I crept back to the pharmacy, plugged ‘er back in, and picked up the allergy meds. Could I make it back with the extra few minutes of bonus juice? Would I stall out in the middle of store, stranded? Should I cut my losses and just hit the beer aisle?
I finally made it back to the cart corral averaging 0.2 mph; I could have crawled faster. But I saved my leg gas for the main shop and I was ready to motor. And motor I did. It didn’t even bother me that they were out of cans of chicken broth—how does that happen?—and the first 48-oz box I picked up leaked broth all over me. (And for those wondering, “Dave, chicken broth has both a) chicken and b) onions,” don’t ask. The vegetarian makes an exception for broth and for some reason processed broth does not trigger the other’s onion allergy.)
So I swept down the aisles in blazing time, tossing items in the basket like Jordan raining threes. I finished, forgetting not a single item, and my legs still had ample power. Screw Murphy, I thought. I didn’t even have to pee. Oh, wait—I shouldn’t have thought that. The bathroom is on the total other end of the store. By the pharmacy. Murphy is such the a-hole.
“What are you doing back here, Mr. Bexfield?” I shooed off the smiley pharmacy staff as I focused on my destination. AND THAT DUDE WHO WAS ABOUT TO TAKE THE ONLY BATHROOM. “Dude!” He let me go first. Murphy, finally, had officially left the building.
I strolled back to the front, checked out with a gazillion Monopoly pieces (part of the store’s promotion), certain that one held the $100,000 grand prize. “It’s a million dollars, actually,” the clerk said. Double cool. And then I saw a woman my age with a family member (brother, husband?) who was in wheelchair unable to control it himself. “Are you playing Monopoly?” I asked. She was. I gave her my stack of tickets and walked out to my car. She soon followed me out… to her accessible van in that last handicapped space. Thanks, Murph, sometimes you aren’t so bad after all.
Email Post
Labels: Bathroom Beer Cooking Karma Leg Strength Murphy's Law Parking Scooters Shopping

Anonymous said…
Hahahaha...Thanks man, I needed that!Really, I'm living just south of Albuquerque and Summer's comin' on. Starting my second Official year of diagnosis with RRMS. Been showing different symptoms for years but the VA isn't the best place for congealing a list of mystery symptoms. Anyway, like you, I prefer to approach this whole mess as actively as possible and with a sense of humor. Great blog, especially the bathroom contest. I finally snagged some condome catheters that make leaks an okay thing for me. Had to learn to pee my pants willingly, like I get an option every time.
April 7, 2012 at 12:16 PM