On a September weekend in 2008 I participated in a 5K Fit Walk to help raise money for multiple sclerosis. I got to wear a number, start off with a massive crowd, the whole bit where it seems you are taking part in the Boston Marathon. Only it was Albuquerque. And it wasn’t a marathon or even a race, it was a walk. A noncompetitive walk. And yet a walk that saw me cross the finishing line after an hour and 20 minutes to cheering crowds chanting my name. “Go Dave!” “Woo-hoo Dave, you rock!” ”Dave! Dave! Dave!” All for finishing DFL. Dead F#cking Last. 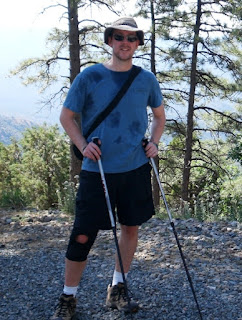 How did they know my name? Probably because the volunteer course sweepers had to radio in to the finish about some guy and his wife still on the course. And people were probably cheering because they could finally go home now that the final two stragglers had finished, but I digress. Every volunteer I passed, I thanked. And told them I wanted to make sure they earned their volunteer dollars—no getting out of their posts early. When I went past water stations, I requested they hand me the water as if I was screaming by. I’d grab the Pixie cup, take a swig, toss the rest on my face, and huck the cup to the side just like the pros! Only every time I tried to drink, it went down the wrong pipe, and I’d start hacking and gacking. Walking and drinking is not in my repertoire. How the hell do you drink out of a cup when you are running?

Now I do have to admit my performance wasn’t truly DFL worthy. Because the event was so popular, we had to park 1K away (so I ultimately did a 7K walk). I was getting over a miserable cold that had left me blind and stiff as a board just a couple days earlier. And stopping to talk to a number of friends along the way let the pack get away from me. I thought I could make up the ground, but my legs decided to stop participating at about the the 2K mark! Still, with the immense help of trekking poles, I managed to drag my stupid body the full 5K so I could bask in all that is DFL glory. Also know that I DFLed for MSers worldwide. Because the next time you participate in any sport, in any event, you can rest assured that you can do no worse than yours truly. Woo-hoo, go Dave!