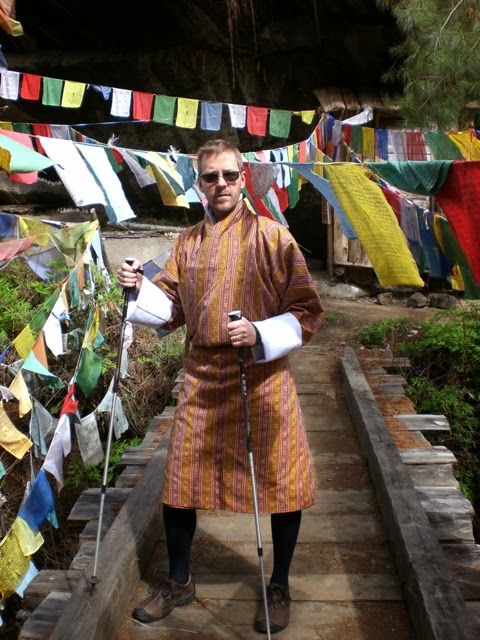 When you use walking aids—and are under the age of 70—you are going to get questions. It doesn't matter if you are using a cane, trekking poles, forearms crutches, walker, or pogo stick (not recommended, by the way). People are curious and have an unquenchable desire to eat one's own foot. This is particularly true when using said walking aids in an unfamiliar way, say trekking poles—with rubber tips—away from the trail. Even I'll admit it does look a bit strange to be walking around Costco with gear more suited to scale Kilimanjaro (although granted the store is large enough to nearly qualify as a leg on the Appalachian Trail if one walks the entire length of each aisle). Of course you expect to get the occasional quizzical look or two. Perhaps the head-snapping double-take. Maybe a question about your disability or a misguided "get well soon." But the snarky, “I don’t see any snow” comments sort of piss me off. Not enough to make me want to clunk these jerks in the head with my Black Diamonds, but enough for me to stew about it.

My stew reached a rolling boil when, while exploring an historic Bhutanese temple back in 2008, some dude (presumably British, not that there is anything wrong with being British) said to me, “Chap, it’s not snowing.” I paused. At the time, I responded with only a smile. But for the next hour I decided to prepare a list of comebacks to make these idiots question their idiotic statements. Option one: a full frontal assault. "In my world where my body is being ravaged by multiple sclerosis, it’s a blizzard every single day." Bam! Okay, that might be a touch harsh. Option two: “I’m training to climb Mount Everest, and nothing interrupts my training schedule, not even a trip to the grocery store. I see you are not in training by your lack of poles and that Haagen Daz in your cart.” Option three made me smile widest. "You don’t see any snow? Well… I don’t see any assholes. Oh, wait. Yes I do.”

Alas, I always just smirk and nod, but it is cathartic coming up with snappy returns that will forever stay in my back pocket. Probably.

Allan Miller said…
I've got a rollator with big wheels with canes attached for occasional use.

I get away with this because I'm older and grizzled. And I live in Canada where people are generally too restrained to say what's on their minds.

Based on my experiences with newly diagnosed MS groups, I think that this is an even more difficult issue for young women.
January 14, 2015 at 10:11 AM

Cay Borduin said…
I am just at the start of secondary progressive (an iffy thing to truly ascertain.) I use a cane now even on the good days so people won't assume I'm drunk!

I am terribly interested in your HALT-MS experience - I would really like to keep at my current state of disability rather than... well you know. Are you available to email about this?

My Odd Sock said…
I like your "training to climb Mt. Everest" response best.
It's amazing what you hear sometimes, but it only confirms the old adage "adults say the darndest things."
January 30, 2015 at 7:17 AM

talulah gosh said…
Wow, I have NEVER had anyone say that to my husband. He uses hiking poles to walk too, and most people either say "god bless you" or something like that (which is kind of weird, but at least not MEAN!!). I guess it proves that Pittsburgh really is a nice place to live!
January 30, 2015 at 9:16 AM

Dave Bexfield said…
Talulah, fortunately it's the minority who are clueless. And they tend to be British. Oh, I joke!
January 30, 2015 at 9:25 AM

talulah gosh said…
Although I have decided if someone does comment, I will use your Mt Everest line, along with "He'll never make it to the top, but we like to let him dream. I figure he'll get about 100 feet up before he keels over, but at least the sherpas can use his carcass for warmth."
January 30, 2015 at 10:02 AM

Dave Bexfield said…
TG, I never thought I'd see "carcass for warmth" as a comment on the blog. But what a practical suggestion!
February 2, 2015 at 9:00 AM

Anonymous said…
I've used my Leki poles on a busy street in the city and had a humorous old fellow look askance and say; "Skiing?" as we passed each other. I didn't mind - he meant no harm, and if he actually knew how hard it is for me to walk, I'm sure he would not have said it. This was the only comment I've ever had. And I live in Britain, so we're not all clueless! :o)
March 12, 2015 at 12:26 PM