I’ve never been much of a shopper. Case-in-point, I’ll conjure up the most bizarre combination of foods remaining in the pantry and fridge to avoid going to the grocery store, which drives Laura bonkers. Sure, I can make dinner with carrots, leftover rotisserie chicken, frozen peas, half a lime, fish sauce, and a package of ramen (hmm, sounds kinda tasty). And just as suddenly as I develop my spontaneous menu, my wife is at the grocery store purchasing all these fresh veggies with instructions for me to use them or else. Ah, success once again in sidestepping shopping. But sometimes your hand is forced. Like when your underwear needs replacing. 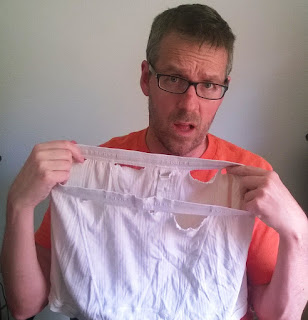 Yeah, I know. Dave, it’s just underwear. You can wear it forever. No one will know how smarmy it is. That’s what I thought, too, until I finally held a pair of my boxers up for inspection and discovered it was basically a rag barely attached to an elastic band. The holes had gotten so big that a warning label was required as the undies were now choking hazards for small children. (“What happened to little Jimmy? Got his head caught in Dave’s boxers—a tragedy. At least they were freshly laundered.”) If I were to put this pair in a piece of luggage and try to fly with it, TSA would confiscate it for immediate incineration. The Smithsonian has been leaving messages to put it on display as an artifact from the 20th century. You get the picture. And if you didn’t, I’ve included a pic of said undies. I’m sorry, there are some things you can’t un-see.

As someone with multiple sclerosis, and being, well, a dude, there are few chores I dread as much as wandering crowded, loud malls teeming with oblivious shoppers who almost appear to go out of their way to run into you in order to look at inexpensive sunglasses and cellphone cases on a cart by the escalator. (Speaking of escalators, tragically a woman recently died in China falling into one and another man lost his leg, yikes.) The cacophony of it all just gets to be too much.

So when I have to clothes shop, I make it count. If I’m forced to be physically present in a store to try on stuff—jeans, shirts, shoes—I’m buying enough to last me a few years. This technique obviously has risks, which explains some of my dated fashion disasters. (I thought, unwisely, that Dockers and pastels were going to last longer than 1986.) But when it comes to clothing that does not need spousal approval, i.e., underwear, I order by the pallet, fashion sense be damned.

Now I am awash in so much underwear that I could fill a tub and bathe in Hanes. Our rag drawer is again bursting with newly added cotton dusters, all with a convenient front pouch to grip. And my MS will not thwart shopping trips for years. Because, let’s be honest, I’m not venturing out shopping again until I need new underwear!
Email Post
Labels: Clothes Crowds Shopping Underwear

Anonymous said…
You don't need to go shopping. Lots of good deals on the net, including Jockey underwear, on Amazon. Often cheaper than at stores.
August 11, 2015 at 5:49 PM

Joan said…
Thanks for the uplifting post, Dave. As much as it pains me to say this, it was funny as usual.

I hate shopping, also, which makes me even grumpier at Christmas. I'm particularly grumpy now that I'm a caregiver for The Husband Who Was Not Invited to Chicago. He had tear duct surgery so looks like I went at him with a bat. I didn't. Really.

Thanks for the laugh and say hello to Laura.

Anonymous said…
Why are you wasting valuable time and energy shopping for underwear? Order online from WalMart or Amazon or even Neiman Marcus. Try them on at home and if they don't fit Amazon (in most cases --check the specific listing) will let you send them back for free. They even send UPS to pick them up.

Dave Bexfield said…
Thanks Joan. And anon, I do most of my shopping online, too. But some things require your presence, like getting fitted for a suit. As for the docksiders, I was referring to pastel docksiders. Yikes. But they do exist....
August 17, 2015 at 6:05 PM

Dave Bexfield said…
Anon, either shop or do laundry. You can chug a while if you just keep washing your non holey underwear.
August 18, 2015 at 8:09 AM

The undies are expensive but lasted me 3 times longer than similar undies I could find at Wal-Mart or Target.

I buy undies for both husband and I from Jockey.com... you can build up points there and at the Jockey Outlet stores and eventually will get money (script) you can use to buy anything from them. At some point in time they will mail you the script which can be used in outlet store or at the Jockey On Line outlet.

Both the stores and on line store have discontinued styles and colors which can be very cheap. If you get a chance go to one of the outlet stores.. there are ones North of Denver and in Phoenix area. The outlet stores have some different merchandise than is available on line. Next time I go to Dallas I will check out the outlet stores around there.

If you think buying undies like that is lazy, at one time when my husband and I lived in SE Albuquerque there was a JC Penny catalog store and I ordered all his levis from them. Also I picked them up at that store. I ordered the pants out of the catalog by making a phone call. You could also mail in catalog orders or go to a catalog store or catalog department in a JC Penny store.

He wore the JC Penny brand of levis. Way back then, people didn't have stuff delivered to their homes by UPS.. it was expensive. Catalog ordering was big in the 1950ies up until close to 1980.