Grumble, grumble, grumble. No, that’s not my tummy pre-breakfast urging me to consume multiple doughnuts (mmm, doughnuts). It’s just me, grumbling about my MS, which has gotten feisty again. After more than five years of being medication free following my stem cell transplant for my particularly aggressive form of multiple sclerosis, I recently was tasked with choosing my next form of treatment. And boy has the treatment landscape changed since 2010 when I got my HSCT.

Back in 1993, the decision of what MS drug to take was moot—Betaseron was our only option. But now it’s like picking out a salad dressing at the grocery store. So many choices! Do I go with the garlic peppercorn ranch with an outside risk of PML or do I try the balsamic vinaigrette that may hose my thyroid? Or do I skip the dressing entirely? Deciding what to do can be so taxing. Here’s how I broke it down, and how I came to a (sorta) satisfying answer.

Right now my disease feels like it is in the slow burn stages. Nowhere near the inferno of the fall of 2009, thankfully, but it’s been swiping my mobility like those people who nosh on grapes in the grocery store. Popping one or two grapes isn’t noticeable, but after a while, a bunch is suddenly gone. Am I rolling into secondary progressive? That’s a very real possibility and another piece I had to factor into my decision.

For starters, I eliminated treatments I had failed: Copaxone, interferons and Tysabri (and I am JC positive to boot). That part was easy. So was saying no to Novantrone—far too many risks with far too little benefit; doctors are rarely prescribing it these days anyway. Then because of the fuzziness of my MS (no relapses in over five years) I nixed treatments that were generally ineffective in secondary progressive trials, so Gilenya, a powerful RRMS oral drug, was out as was Tecfidera, which also showed inconsistent performance in progressive MS.

What about Lemtrada? It’s a big gun, and a treatment I tried to get on in 2009 as part of a clinical trial, but there would be a few issues with taking it now. It works best in the relapse-remitting phase of the disease, the first infusion in New Mexico just took place last week so the waiting time would be lengthy, and my stem cell transplant took a not so dissimilar path as both are immune system reboots. Also Lemtrada does come with a host of side effects, something I might be more willing to overlook if my MS was raging, but it’s not. 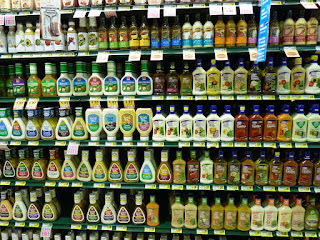 Off label options? Rituxan seemed like a logical, no-brainer path, especially after the recent announcement of ocrelizumab’s success in treating the primary progressive form of our disease. Ah, but lack of FDA approval, likely to happen in 2016, means insurance will not cover the medication—despite me asking nicely. I won one big fight in this department, but two? Wasn’t going to happen, especially since I would not be taking the drug as part of a clinical trial. And finally, another stem cell transplant, the biggest gun (and one I have zero regrets using) seemed like too drastic of a step for a treatment that lasted me fewer than five years and one that would cost me personally six figures. So by process of elimination, that leaves me with one lone salad dressing on the shelf: Aubagio.

No, Aubagio might not have the same oomph in preventing relapses as the other orals, but it does have a wild card: it targets both T and B cells. And B cells, as has been shown in ocrelizumab/Rituxan trials, just may be a key part in treating secondary progressive MS. Plus, its side-effect profile is relatively mellow compared to most other DMDs, although you have to have your liver checked regularly.

So there you have it. Choosing a salad dressing isn’t easy, but if you stand there and stare at the shelf long enough, one usually stands out. Or you throw your hands up in frustration and just go home and make your own: whisk up three parts oil, one part vinegar, a touch of Dijon mustard, salt and pepper to taste, bam!
Email Post
Labels: Alemtuzumab Aubagio Avonex Betaseron Copaxone DMDs DMT Dilemmas HSCT insurance Lemtrada Novantrone ocrelizumab Rebif Stem Cells Tecfidera Tysabri

Anonymous said…
I'm sorry to hear you seem to be progressing, Dave. Good luck with the AUbagio, you certainly make a great case for it, and hopefully it will slow or stop things long enough for you to get Rituxan or Ocrelizemab. I had HSCT two years ago in Russia, and was just infused with Lemtrada two months ago. I'm hopeful. There are infuion centers popping up all over the country, so maybe the wait wouldn't be as long as you think should you decide to go that route. I know at first I was totally not on board with the risks, but looking at them closely I decided they were pretty manageable, but it took me a few months of soul searching to get there. At any rate, so many of us are rooting for you and wishing you well, and I for one appreciate you thinking out loud with us on all things MS. Take good care, Joren
October 7, 2015 at 11:32 AM

Yvonne said…
Hi Dave Sending you healing wishes and hoping that Aubagio works great for you. I have to comment on the opening words of your post. Grumble, grumble, grumble... It reminds me of a song we used to sing in chorus in elementary school. It goes, "Grumble, grumble, grumble- this is no fun. You don't have to like it cause it's got to be done!" That's all I know of it which is a bummer as now just those lines will be stuck in my head all day... Good luck my friend...
October 7, 2015 at 11:36 AM

Dave Bexfield said…
Joren, keep me posted on your Lemtrada experience. Interested to see how it goes post HSCT. And thanks for the wishes, Yvonne! You always brighten my day.
October 7, 2015 at 11:58 AM

Anonymous said…
I feel your frustration Dave. I was diagnoses in 2005, refused drug treatment because I rebounded quite quickly.
I moved to secondary progressive in 2009. I appreciate your blog and above all your honesty. I am on tysabi (seemingly without any effect) and soon I may move on to

It is frustrating and one feels the need to be pleasant and upbeat when you have an appointment (or is that because I'm a Canadian ?) so thank you and carry on the good fight!

Unknown said…
Dave, I'm also pondering my next move as I plan to come off Tysabri. As usual your post was so informative, and perhaps Aubagio is now something I will look at. I'm either transitioning or have moved in the SPMS stage. Ever hopeful for new treatments that are on the horizon like Ocrelizemab. It's so wonderful to have this site for support and information! Thanks a million!
LMH
October 10, 2015 at 10:27 AM

CVfactor said…
Best of luck with Aubagio Dave. Is that picture of you in the hospital recent or is that from the HSCT procedure?
October 11, 2015 at 8:45 AM

Dave Bexfield said…
Thanks LMH! And yes CVFactor, that was definitely HSCT. No recent hospital visits thankfully. Thanks for the well wishes.
October 11, 2015 at 5:52 PM

Avril H said…
Best of luck Dave, it is very good for the rest of us having the benefit of your thought process. Keep up your great work.
October 16, 2015 at 5:57 AM

Jamie Forrest said…
Sending you my best Dave! Thanks for sharing your thoughts, your experiences and your reasoning behind your decision-making. I started taking Avonex, a weekly injection, and after 15 years of that, I'd had enough. Didn't want to be a pin cushion anymore. I've been on Gilenya for the past two years, however, I've just stopped taking it due to too many white blood cells in my system. I'll meet with my neurosurgeon in a few weeks to discuss my next steps too and will discuss Aubagio with him. Please keep us updated with your well-being. You are an inspiration to us all!

Unknown said…
Hi Dave,
I too finished HSCT last year in Florence, full BEAM cocktail. But when I did it, I was possibly early SPMS already. Tough to say when Tysabri may have covered up any active inflammation on MRI. I'm only one year post transplant, but the treatment affected my foot drop, which is worse now. Or was it progression? You are correct, Rituximab may not be covered, although I have been wanting to get on it due its anti-b cell properties. Interesting and timely read on Aubagio. I did not know it had effect on b cells. So, until Ocrelizumab is out next year, Augbagio it is. Thanks for the post and insight.
November 4, 2015 at 5:30 PM

Dave Bexfield said…
Thanks for the note, TGE. Unfortunately, every twinge will fire up your worry zone on the brain. Maybe it's progression, or maybe not. Best to keep a positive attitude and stay aggressive. In retrospect, I should have been more proactive and gotten on treatment post HSCT as soon as I noticed some slipping. Smart to have a plan.
November 4, 2015 at 5:38 PM

Unknown said…
Thanks Dave. I am in the process of asking my neuro about Aubagio until Ocrelizumab is approved. Will see what he says. My balance has been worse and foot drop worse since HSCT and as you know,most studies show that ten years or more after transplant, most patients relapse and start to progress. The active inflammatory stage is only one component of several driving this disease. Until neuroprotection or the mechanism of progression is understood, this promising treatment will only buy time. Let me know how you do with Aubagio.
November 5, 2015 at 6:47 PM

Dave Bexfield said…
Buying time should not be underestimated. But this disease holds no prisoners. I would be in far worse shape without HSCT, no doubt. Keep me posted on your progress too.
November 5, 2015 at 7:17 PM

Dave Bexfield said…
Interesting, Matt. Combo therapy could be the wave of the future. Keep me posted!
January 4, 2016 at 3:58 PM

Unknown said…
This comment has been removed by a blog administrator.
February 27, 2016 at 8:50 AM

Anonymous said…
I appreciate how you show your thinking about the various medications, as it's a complex field of hard choices
May 15, 2016 at 8:07 AM

Dave Bexfield said…
Luis, after taking Aubagio for a year, I moved on to Rituxan as my insurance company approved it. I feel still I'm slowly sliding, but the Rituxan appears to be helping stem that tide. I've been on it a year. More details are in our forum.
February 13, 2017 at 4:07 PM