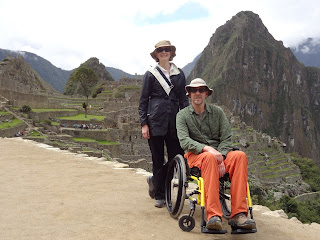 Demi Moore was just going to have to wait for me. In fact, I didn’t even know she was there, much less an arm’s length away, which was probably a very good thing. See, at the time, I was descending some extremely precarious steps at Machu Picchu… on my rear end, one slow butt scooch at a time. And Laura definitely did not want to hear my final words be a surprised celebrity-induced exclamation “HEY, AREN’T YOU THE ACTRESS DEMI MOOooooooooore” as I plunged off a precipice, fortunate to being wearing bright prisoner-orange pants so my body would be easier to recover.

Honestly, I never thought I’d get here, to see firsthand one of the wonders of the world. With my mobility restrictions due to multiple sclerosis, heck, it wasn’t practical for me to be anywhere near here. Especially on this day, of all days. 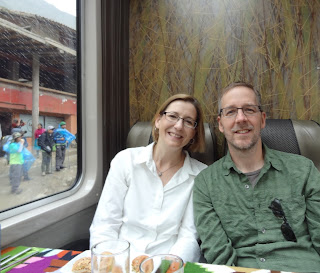 A steady rain had glazed our train car all morning, turning the scenic ride to Aguas Calientes—the launchpad for the Inca ruin—into a trip that forebode misfortune. The rocky steps and paths of Machu Picchu, already worn smooth over the centuries, were sure to be as slick as a throw rug on a freshly waxed floor. As we picked up rain ponchos in the market to go with our raincoats and umbrellas, my stomach churned.

Up until now, the MS gods had been incredibly merciful on this trip. Despite forecasts of rain, we had met only sun. Food and stomach issues were never a problem, illness had thankfully stayed away (when I hugged my mom goodbye for this vacation, she informed me she had just gotten a cold!), and even my bladder and bowel issues were cooperating as much as they can cooperate. That was a bit of a shocker, as staying well hydrated was critical to avoid altitude sickness, a common and debilitating threat in the Andes that was never realized in our case. 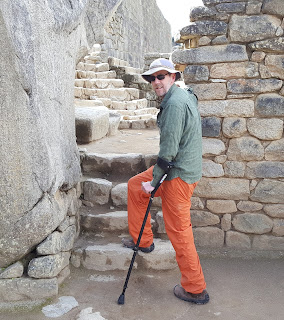 As our bus twisted up the mountainside to get to the 15th century Inca citadel, a 30-minute bumpy ride, I was resigned to spending the afternoon parked next to a covered gift shop touting Peruvian knickknacks, clothing made with faux alpaca, and pan-flute CDs (gah, playing on repeat!). And then the rain stopped, the mist lifted, the sun shone, the rocks dried. I was going to be able to visit Machu Picchu, a place I thought forever off limits. Thank you, MS gods! 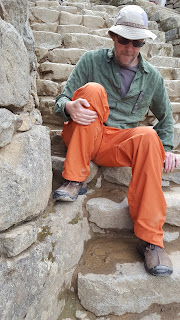 And then we got to the entrance… with steps everywhere. And I was informed that if I had to use the bathroom, now would be a mighty good time—I'd have to hold it for the next five hours—as there were no facilities in the ruins. And, warning, there were many more steps to come before we could reach any vista, only without those pesky, helpful railings found at the entry. And because the Inca were such anal-retentive master builders, deep handholds in the wall were virtually nonexistent since virtually every rock was a perfect, snug fit. Curse you, MS gods!

But then, serendipitously, it all happened. I managed the myriad steps (slowly). I managed the narrow passages (slowly). I rolled on the packed dirt paths clinging to the hillsides (slowly). And when we reached the Temple of the Sun, the most important building in all of Machu Picchu, the decision to climb to the base was nonnegotiable. The brilliant Torreon was as advertised.

Taking in what I had just accomplished, I realized just how fortunate I had been. Multiple sclerosis tried its best to stop me, and it failed today. I also realized that it was wise not to push my luck. I know too well the fickleness of those MS gods. It was time to find a safe zone and park it so Laura could fully explore Machu Picchu. That meant instead of picking my way down the OMG steep steps of Temple of the Sun on forearm crutches (no doubt risking a trip-ending fall), I opted for the far safer technique of dropping down one step at a time on my duff: Move one leg, move the other, drop a step, repeat.

Thanks for understanding, Demi.

*For those wondering, and I know many of you are, unbelievably I did not have to pee for the full five hours we were away from the bathroom. My extra layer of protection was never needed. The MS gods may never be so kind again, but I’ll take it. Also, my guides at Aracari (www.aracari.com) probably had a hand in my success as well.
Email Post
Labels: Adventures Balance Bathroom Caregivers Challenges Crowds Ego Hiking No Regrets Parking Serendipity Stubbor Stubbornness Travel Underwear Wheelchair

Anonymous said…
Ha, I suspected you were out there getting more than enough exercise, on stairs no less! Sounds like a fantastic trip, thanks for writing it up, always a treat to read.

Anonymous said…
I dream of going to Machu Pichu someday...awesome that you made it...in one piece! Thanks for continuing to inspire me. ~ Angela :)
November 6, 2016 at 5:32 PM

Dave Bexfield said…
Anon, it was pretty amazing and worth all the challenges to get there. And Larry, my cardio was lacking. No excuses on this end. :)
November 6, 2016 at 6:56 PM

Fran said…
Great story, Dave.
My biggest fear while travelling and having to go to the bathroom - a hot mess if you're a woman and in India. And we MSers hate it when it's hot
(Speaking of which, I need to invest in a She-Wee)..
I've been doing some research on the (lack of) toilets in India - and every time I rush to the bathrooms at home, I'm glad I don't need to hold like the millions of women in India who have to wait for the cover of night to relieve themselves in a field
November 9, 2016 at 10:20 PM

Dave Bexfield said…
Fran, India is a bathroom challenge no doubt. And it is compounded if you have a disability, as many of their toilets are of the squat variety. If I tried that these days, I wouldn't be getting up! But it's doable, especially if you have good guides and a solid bathroom plan when out and about (knowledge of hotels/restaurants with western toilets). And of course wear protection for when you need Plan B.
November 10, 2016 at 10:07 AM

Anonymous said…
Cool story Dave. I'd like to go there someday. Did you go with a tour group or just you and Laura? What brand wheelchair are you using in the picture?

fran Anderson said…
Thanks so much, Dave for the good-humored but oh so real blog! We are so grateful for the hope and guidance you give the MS community and family.
November 11, 2016 at 10:05 AM

Dave Bexfield said…
Oh, thanks Fran. :) As for the tour, we had to do it privately. I slow down groups too much these days, although I could have potentially done a group trip for disabled folks (those exist, and I may even work to arrange one in the future). The wheelchair: Invacare X4. I like it, but don't love it.
November 11, 2016 at 10:40 AM

Dave Bexfield said…
Ah yes, the Inca toilet. And with no bush/tree/shelter and lots of people, there would also be the Inca arrest and detention for sullying a UNESCO World Heritage site. :)
November 16, 2016 at 9:43 AM

Dave Bexfield said…
Fearless, MOS? More like scared you-know-what-less. But that can be a strong motivator I've discovered.
November 17, 2016 at 10:11 AM

Unknown said…
Why is it I always smile when reading your posts even though I think you are not so much brave but tempting fate for repeatedly challenging the MS Gods? You get me every time with your travel tales and this one is no exception. Thanks for being out there and letting us know that while planning is good, overthinking would stop us from doing more. Keep on keeping on....

And BTW I now own my own orange pants and they definitely allow us to be spotted in the crowd or in the bushes. No hiding what you would have been doing if the urge had to be satisfied up there.
December 15, 2016 at 8:44 PM

Dave Bexfield said…
Laura, likewise, at least when it comes to making me smile. Now I just need a bright neon-yellow jacket to fully warn others of my presence!
December 16, 2016 at 9:15 AM

Belinda said…
Dave, I love your posts. Thanks for sharing your travel experiences. I love to travel. I went to the Holy Land on a group tour in October, and I felt like I slowed the group from time to time. I certainly hope you do organize a trip or two in the future. It would be great to travel among similarly situated MSers. Thanks, again!
December 18, 2016 at 11:16 PM

Dave Bexfield said…
Belinda, there actually have been discussions of an ActiveMSers trip recently, but there are a few hurdles I'm trying to work around. Like what happens when there are finite toilets at bathroom stops and everyone has to go NOW. And potentially limited accessible rooms at hotels. Hmm. But I think it can work with the right planning. Stay tuned!
December 19, 2016 at 5:06 PM

Anonymous said…
Amazing. Makes me think maybe I could do it too. I've always thought it would not be possible
January 1, 2017 at 8:47 PM

Dave Bexfield said…
Anon, it might not have been easy, but it is most definitely possible. I hope you get there!
January 2, 2017 at 9:37 AM

Julia Apps Douglas said…
Dave
I happen to read about your adventure a couple of months ago. 2 weeks before Christmas I received and invitation to visit Guatemala.I decided to say yes, and an adventure I did have.
Your encouragement to not let MS beat us and advice paid off, I spent 2 weeks traveling from Guatemala City to San Antonio Huista in the highlands. I did not climb a Mayan temple (the steps were 5 inches wide to my 9 inch foot)and I figured that I would be safer on the ground.

So with my forearm crutches, and occasionally a wheelchair I DID IT!

Now to plan a Toronto weekend on my own!

Dave Bexfield said…
Julia, fan-freaking-tastic! We surprise ourselves all the time. Sometimes you just have to go for it. Way to go!
April 10, 2017 at 9:21 AM