When a Friend with MS Dies 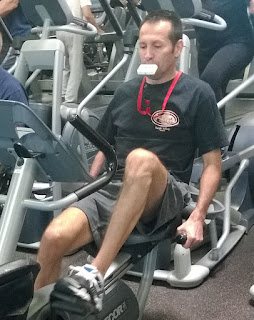 On March 7, after 30 years of living with multiple sclerosis, my friend Michael McDaniel passed away at the age of 55. News of anyone being taken with the disease many of us share, especially at such a young age, is disturbing, uncomfortable, frightening. Don’t let it be.

Life with a serious health issue, as is death, is unpredictable. But that’s also just life. Don’t forget that. I got a note the other day from a gentleman recently diagnosed with ALS. He joined the optimistic misfits at ActiveMSers because he doesn’t plan to bemoan his diagnosis and fold up the tent. No.

Instead of frittering away valuable time worrying about what might happen (or even what will likely happen), pause and reframe those thoughts. Pause and let today wash over you. Every day bathe in the now. Let the now cleanse the uncertainties of tomorrow.

No, it isn’t going to be easy. I’ve lost friends and family to car accidents, to cancer, to mental health issues, to drug overdoses, and to MS. No matter the age, no matter the cause, it’s never easy. Instead I choose to celebrate each day—the sunrises, the sunsets. I choose to live the biggest, richest, fullest life I can. In the face of daunting health challenges, I choose. I choose.

This is what I said at Mike’s celebration of life in Albuquerque last month. Writing and speaking these words helped heal a piece of me, and hopefully helped his friends and family better navigate this difficult time. Perhaps it will aid in your journey, too.

This is my final solid to Mike.

(For his celebration of life in Phoenix last weekend, which I was unable to attend, the family asked for a video of my eulogy, which I provided. If you prefer to watch rather than read, you can view it here: https://youtu.be/qLmohcOBQDM)

Good morning. I’m Dave Bexfield. To understand just how much Mike meant to me, I need to tell you a little about myself. When I was diagnosed with multiple sclerosis 13 years ago, I also started a website called ActiveMSers. Today, it is one of the longest-running MS blogs on the internet with thousands and thousands of followers—I have countless MS friends all over the world. But I only had one best MS friend. And that was Mike McDaniel.

We met shortly after I was diagnosed at a dinner arranged by friends. At the time, I didn’t know many MSers and as a newly diagnosed patient, I was not-so-subtly playing the role of a deer. A deer staring into headlights, frozen.

But then there was Mike, telling me how he carried his daughter Madison on his shoulders. To prove that he could… and, apparently, to keep his wife Rachel on the cusp of cardiac arrest. Okay, I thought. That’s one hell of a streak of stubborn. I like this guy. As long as he didn’t live in a distant town, maybe we could be friends. Turns out he lived closer to me than I could have ever imagined—his house was only a few blocks from mine.

So began our 13-year friendship. And like any friendship, I’d occasionally drive him crazy, and he’d occasionally drive me crazy. But we learned from each other. Especially at the gym. I urged him to work out harder, faster, longer. He taught me, well, the opposite. As much as exercising was good for our health, socializing was healthy for our well-being. And when it came to the art of socializing, Mike had few peers. 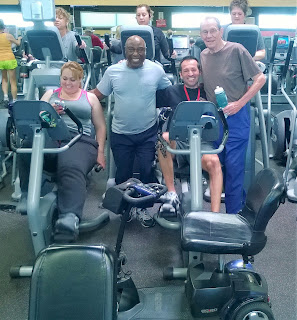 One of my favorite Mike stories happened during an evening when my wife and I invited Mike and Rachel over for a unique dinner. It was going to be unique because the two gimpy guys were going to make a feast all by their lonesome. And by feast, I’m talking a five-ingredient black bean soup, a favorite recipe of mine because it is so easy and so fast—30 minutes tops.

So, an hour-and-a-half later, we were sitting down to a “gourmet” meal. We did it! I had taught Mike exactly how to make it, even initially letting him take charge of cutting the onion with a huge, very sharp chef’s knife. But after seeing his eyes grow into saucers and imagining Rachel’s disappointment with being married to a 9-fingered husband, I took on the knifing duties. We were so proud of our accomplishment, and I was thinking, Dang, Mike might even start cooking this simple soup for his family. Teach a man to fish, right? At the end of the meal he pulled me aside.

“Dave, I’ve got to tell you something.”

I almost stopped him right there. I knew how good it felt to accomplish a difficult task. He didn’t need to thank me. This was my gift to him for being such a great friend. I started reaching around to pat myself on the back when he finished his thought.

As we both moved up the disability chart, and I moved out of the neighborhood, getting together became more challenging. We relied more on phone calls, but that just wasn’t the same. So we hatched a plan. We were going to go on an epic adventure. Two gimpy guys. No caregivers. A Thelma and Louise outing—without the driving off a cliff stuff or Brad Pitt. However there were a few problems.

Since neither of us could walk well, we were kind of stuck in the car. And because of MS and bathroom issues, we couldn’t be gone for more than a couple of hours in the event Mother Nature called. So the plan came together sort of by default. We were going out to lunch! At a fast-food restaurant with a drive-thru. And we were going to eat in the car…. Okay, so maybe it wasn’t a movie-worthy adventure, but eating Popeye’s—at a local park, watching the ducks do things ducks do—was unforgettable. 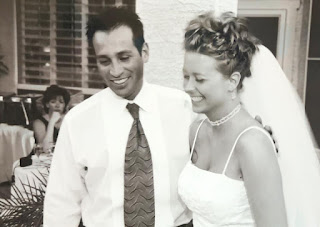 The last time we talked, our conversation steered, as it often did, to our families. Mike was unbelievably smitten with Rachel, and unbelievably proud of Maddie. Maddie was driving now, which worried him. But he was most worried about Rachel. He knew her happiness was tied to his health… and he had no more answers in that department. He wanted to give her more time. She earned it. She deserved it. He loved her so much. But he knew what lie ahead.

We wrapped up with our standard goodbye… “So how are you doing, Bexfield?” “Fantastic, Mike. As always. And how are you doing, McDaniel?” His voice was weak from the MS, but right then it got stronger. Defiant. “I’m good, real good.”

Telling big, fat lies about our health always made us laugh through our grimaces. But, you should know it wasn’t really a lie. No. I’ll forever be fantastic. And know that Mike, wherever he is, will forever be good. Real good.

My Odd Sock said…
Well said, Dave. You were lucky to have him in your life. Mike, likewise.
Thank you for inviting us into your friendship.
Keep moving.

Rosie McGourty said…
The moments that fill our hearts often carry us the furthest.
Thanks for sharing Mike with us Dave. May he rest in peace.
xxx's to you Dave.

Tara said…
Brought tears to my eyes. Thank you for sharing this with all of us. I wish I had a friendship like that - you both were lucky to have each other.
April 25, 2019 at 7:59 PM

Dave Bexfield said…
All of these comments are really appreciated. Thanks so much for the kind thoughts.
April 26, 2019 at 10:53 AM

David Stratton said…
Cooling vests:
I look for the ability to turn the cooling off as well as on because one may well hang out for a while in a place with air conditioning and not need it.

Anonymous said…
A wonderful tribute to a dear friend and honoring of your friendship. My thoughts go out to his family and many of us who have read this will now carry a bit of Mike forward. Thank you for sharing.
April 29, 2019 at 7:08 AM

Kathy said…
Hi Dave,
Thank you for re-sending.
'Two' very special friends. Listening to you eulogy makes me stop and think. My life is good, too!!
Have just sent a copy to a very special friend of mine who also has MS. She is doing well, she's going thru other difficult times in her life but she is continuing on with a smile.
Again, thanks for re-sending, I guess my pause & re-thinking just now is like pausing at the gym?
Take care, Kathy (who me you in Pienza in 2008, I think)

Dave Bexfield said…
Kathy, seems like yesterday our paths crossed! We'll be traveling again I am sure.
June 4, 2020 at 4:24 PM